Do Believe the HyPe: AGIG is replacing natural gas with hydrogen

Plagued with calamities of Biblical proportion, ranging from extinction-level forest fires and devastating floods to the mass bleaching of their famed coral reefs in marine heatwaves, Australians are sensitive to extreme weather events and committed to doing their part to reduce and hopefully, someday, reverse the effects of climate change. Industry is being asked to do its part to reduce emissions and Australian Gas Infrastructure Group (AGIG), a CK Infrastructure (CKI) member company, is boldly moving to replace fossil fuels with zero-emission hydrogen.

These hydrogen parks are no playgrounds, but rather create hydrogen to blend with natural gas to produce an even cleaner fuel for homes and factories. The first project is Hydrogen Park South Australia (HyP SA), located at the Tonsley Innovation District. Its establishment was supported with an A$4.9 million grant from the state Government of South Australia to promote research and testing in hydrogen supply. The official opening on 19 May 2021 hosted the Premier of South Australia, The Hon Steven Marshall and the South Australian Minister for Energy and Mining, The Hon Dan van Holst Pellekaan, showcasing the state- and national-level importance of the project.

HyP SA is supplied with renewable energy from the grid, which is used to create up to 20kg of hydrogen an hour, to be blended into the existing natural gas network and supplying more than 700 homes. Production is adjustable depending on the demand from households and industry, with up to 40kg of storage on-site when supply exceeds demand. Production can be ramped up or down depending on the electricity supply from wind and solar sources as the wind blows or the sun shines. Either way, the whole project vents only oxygen, an entirely benign emission. 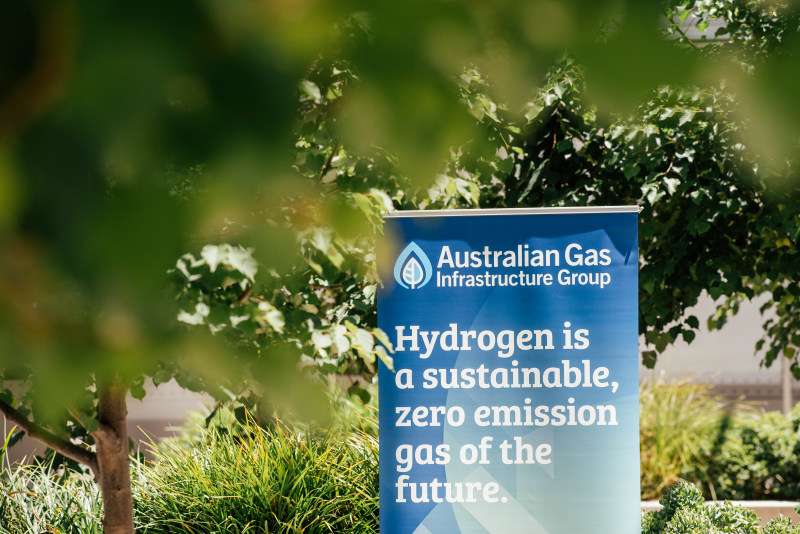 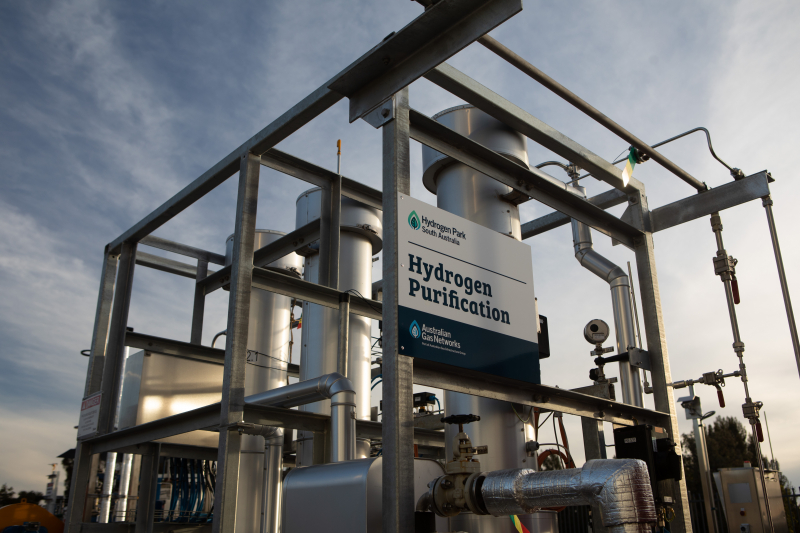 HyP SA isn’t the only one of its kind, but rather the prototype from which more will follow. The HyP Gladstone project has been similarly supported by the Queensland Government. They plan to begin pushing blended hydrogen through their gas pipes later this year, aiming to supply 770 homes and businesses across their entire gas network with a 10% blend – to start.

AGIG’s leadership is recognised through research partnerships across the country. The Dampier to Bunbury Natural Gas Pipeline is also the recipient of a grant from the state Government of Western Australia for a feasibility study on blending hydrogen into the pipeline for use by industry in Perth and other major communities.

These hydrogen parks are no playgrounds, but rather create hydrogen to blend with natural gas to produce an even cleaner fuel for homes and factories. 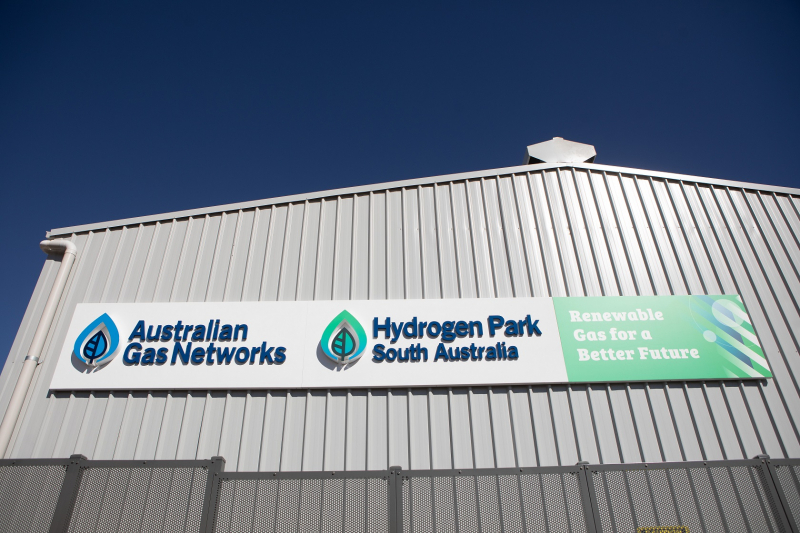 The Australian Hydrogen Centre is the locus of research for completing comprehensive studies looking to decarbonise gas in Victoria and South Australia, with a focus on implementing 10% hydrogen into gas networks and converting gas networks to 100% renewable gas. It is a collaboration between AGIG and the federal government Australian Renewable Energy Agency and, in addition to accelerating learning from experiences at HyP SA, it will build public awareness about Australia’s hydrogen future.

Collaboration with other world leaders complements the cooperation with Australian government agencies. Executives and engineers from AGIG share experiences with, for example, Northern Gas Networks, a leader in the hydrogen economy of the UK – and a CKI member company. While Australians are feeling some of the hardest blows of an unpredictable climate, they know they are not alone. AGIG is their ally, exploring how the whole nation can do its part and encouraging people to just believe the HyP.

Hydrogen Park South Australia isn’t the only one of its kind, but rather the prototype from which more will follow.

Superdrug’s nurses are taking on the toughest COVID-19 has to offer by volunteering to serve on their nation’s front lines, fighting the disease.

COVID-19 may be invisible to the eye, but not to scientists working with Northumbrian Water to trace its spread by sampling wastewater.

Team Watsons Water got creative and worked round the clock to deliver life-saving PPE to Hongkongers.

LKSF delivers the sword and shield to medical professionals

High-performance management at HK Electric is supercharged through education delivered by a host of internal and external professors at the HK Electric Institute.

The high-pressure crucible of Hong Kong’s shopping environment seems like it would leave little room for learning among retail professionals. But A.S. Watson’s commitment to higher performance creates opportunities for promising staff to elevate their game at its very own Retail Academy.

Tactical donations make a difference to help tackle one, or even several, problems. But a series of strategic donations will bolster the entire biological, bioengineering and biomedical establishment in Hong Kong with world-class platforms and integrative thinking.

Vanishing bee populations are a major problem for global agriculture. 3 Austria’s 5G network is a key part of a tech solution that puts beekeepers ‘inside’ their hives to solve problems for Man’s invaluable helpers.

Port of Felixstowe’s 5G plans not only put the power of massive dockside cranes in the delicate digits of desk-driving derrick directors, but also connect a legion of sensors to help train AI that could save Hutchison Ports millions of pounds in maintenance efficiency.

5G connects Hong Kong to the world and the universe

5G is a platform to build dreams on and 3 Hong Kong is helping dreamers to climb on board. It works with small businesses and the community to help them overcome COVID-19 challenges and to unite their artistic vision, with an eye on the stars.

The Port of Felixstowe is leading the hydrogen revolution building in the UK. It aims to transform not only its own operations but the regional eco-economy too. First, the Port – then trains, trucks and homes will follow.

The UK aims to decarbonise the entire rail network. Eversholt Rail, a UK rail company, is leading the way in providing zero-emission hydrogen-powered trains for the UK. Trainspotting is about to get a whole lot greener.

Watsons’ ninth-generation store design ethos is transforming stores into experiential spaces, making the most of their O+O strategy and aligning Watsons with customers’ green hearts. Delivering human connection and a commitment to environmental stewardship is incorporated into features in stores from Hong Kong to Türkiye.

Beyond Deep Water: Port Design in the 21st Century

Designing 21st-century ports requires that operators cater to the demands posed by increasingly enormous container ships. Use of autonomous vehicles and AI cranes and vehicles drives efficiency. The complex dance of goods and containers at a modern port only happens when designers set the stage for success.

Energy Made Safe for People and the Planet

Power plant design demands that everyone — from staff and neighbours to dolphins and birds — is kept safe. HK Electric and Canadian Power may be an ocean apart, but both have ingenious design elements and technology that enable them to take on explosive fuels and turn them into a safe stream of electricity, powering people’s lives and entire economies.

The online doctor will see you … NOW!

A clean sweep at detecting cancer

PharusDx, a CK Life Sciences and CK Hutchison investee, is developing a test that would provide fast, accurate diagnosis of not one but multiple types of cancer – all from a single blood sample. And it is using AI to do it.

HUTCHMED’s global Phase III registration trial of its colorectal cancer-fighting drug, fruquintinib, aims to gain the regulatory approvals needed to bring it to cancer patients around the world. A 14-country study is the next step in bringing new options to doctors and new hope to families struggling with cancer.